Exhibition “Wake up, Europe! Support and solidarity mobilizations with Bosnia and Herzegovina and its citizens, 1992-1995” 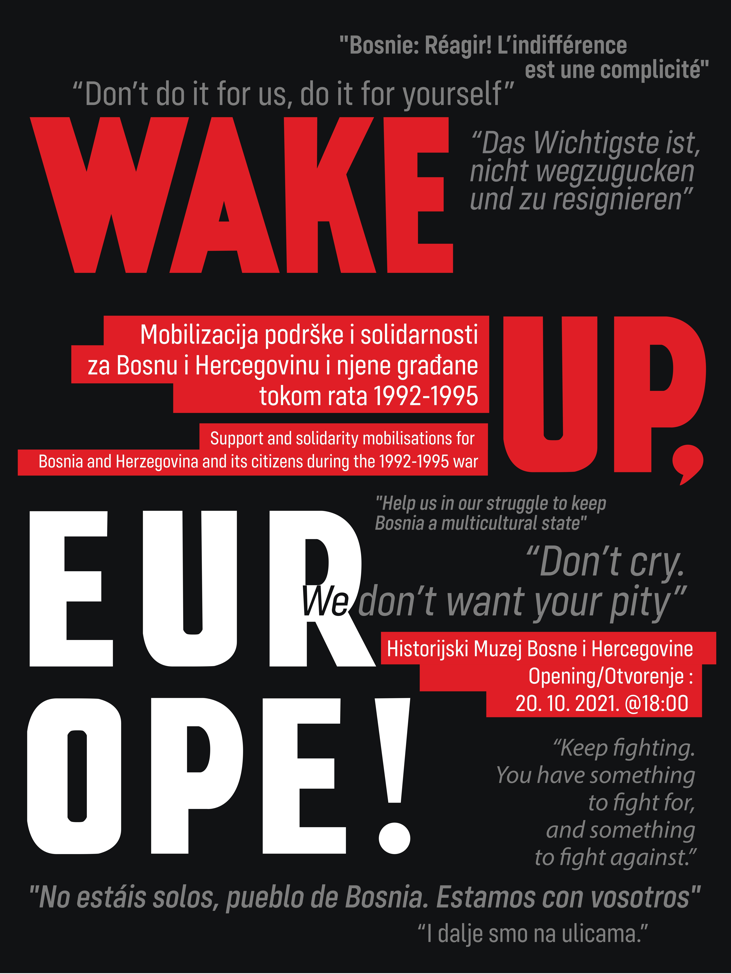 A project of the History Museum of Bosnia and Herzegovina, in cooperation with Memory Lab, with the support of the  Goethe Institute BiH  and the French Institute for BiH

The Covid pandemic and the “migration crisis” have put the question of solidarity in Europe back on the agenda: What do we understand by solidarity? What can be done to strengthen solidarity with societies and people who are existentially threatened? There is an example of European solidarity in the near past that can be inspiring for today, even more as it is very little known: During the war in Bosnia and Herzegovina from 1992-1995, numerous initiatives arose in France, Germany, Spain, Italy, Sweden, the Czech Republic and other European countries, and citizens, NGOs, informal groups and artists articulated support and solidarity with Bosnia and Herzegovina and its citizens in various ways. The aim of this project is to provide general information about forms, activities and actors of the support and solidarity movements with Bosnia and Herzegovina in Europe during the 1992-1995 war and to illustrate them concretely using individual examples. By increasing awareness and knowledge of this little-known but important chapter in recent European history, the exhibition is also intended to stimulate the discussion for today: What can we do today to show solidarity with people and societies that are experiencing war or other crisis situations?

The exhibition was opened on October 20, 2021, at the History Museum of Bosnia and Herzegovina in Sarajevo. I was part of the organising team and was in charge of the historical research, finding the documents and writing the accompanying texts. The exhibition will probably be shown in other countries in Europe in 2022. More info soon. 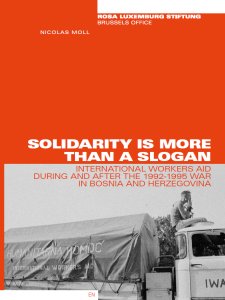 You can download the PDF here.
You can order a free print version here.

For the majority of people in Europe, the war in Bosnia and Herzegovina remained mainly a TV event; many felt that it did not really concern them or that nothing could be done about it. But at the same time there were also tens of thousands of individuals in countries across Europe who decided that they did not want to remain bystanders, just watching what was going on, but were determined to do something. This went way beyond professional aid organisations: many smaller civil society organisations and especially newly created, often informal, groups launched numerous activities. International Workers Aid (IWA) was one of the initiatives that emerged from these civil society mobilisations during the war in Bosnia and Herzegovina. It was a highly original initiative in several respects.

The seminar cycle “Places of violence, places of learning” is organized by crossborder factory (Berlin), Neuengamme Concentration Camp Memorial (Hamburg), Memorial of the Montluc Prison (Lyon) and Cultural Heritage without Borders Albania (Tirana), in the framework of the South Eastern Europe Initiative of the Franco-German Youth Office and of Memory Lab.
The first seminar took place from 19 to 23 October 2020 (online), with a focus on the Neuengamme Memorial and other memory sites in Hamburg/ Germany which we visited via live-streams. The second seminar in Albania is planned for October 2021, and the third in Fracne in spring 2022. The participants are educators, memorial / museum staff, youth workers and other interested persons who are involved in educational work / memory work / civil society activism, living in Albania, France, and Germany.
More information here

1945 versus 1995, Europe versus the Balkans? A plea for an inclusive and differentiating pan-European culture of remembrance

Rosa Luxemburg Stiftung – Brussels Office, 5.5.2020 ;
English version:  FOLLOW THIS LINK
German version: FOLLOW THIS LINK
Essay on the importance of including the Yugoslav and post-Yugoslav history and memories in an European culture of remembrance. “(…) I am not trying to play off the wars of the 1990s against the Second World War or the Balkans against Europe. In fact, quite the reverse. I want us to think about these dates and places in terms of each other. Not to mix them up or equate them. 1995 is not 1945, and vice versa. The Balkans and the Yugoslav region are not the same as other European regions. But they are nonetheless European regions. And only by thinking about them together will it be possible to identify, work out and understand specificities and differences, similarities and parallels, as well as trans-European relations and interconnections. In short: if, in 2020 and beyond, we wish to commemorate the past in a truly European sense, and really wish to take seriously the concept of a ‘European culture of remembrance’, we must also think about the Yugoslav and post-Yugoslav region and not forget neither 1995 nor the Yugoslav 1945.(…)”

New publication: Promoting ‘Positive Stories’ of Help and Rescue from the 1992-1995 War in Bosnia and Herzegovina. An Alternative to the Dichotomy of Guilt and Victimhood?

In: Südosteuropa. Journal of Politics and Society, vol 67, n°4, 2019, 447-475;
PDF in open access: DOWNLOAD PDF
Abstract: Public discourses about wars and mass violence are often dominated by questions of guilt and victimhood as well as a focus on the figures of ‘perpetrators’ and ‘victims’. This can also be observed concerning the public remembrance of the 1992-1995 conflict in Bosnia-Herzegovina. However, attempts were made here to promote the memory of another war-related figure: that of the rescuer who helped people ‘from the other side’. The author analyses these attempts at remembrance in Bosnia-Herzegovina, and places them within the context of global efforts to publicly acknowledge rescuers, in particular the ‘Righteous Among the Nations’.

The 9th annual study trip/workshop took place from 22 to 28/9 September 2019 in Albania. “Unbunkering the past: How is Albania dealing with its (communist) history?” was the leading question of the program which combined visits to memory sites in Tirana, Spac, Shkodra, Kruja and Gjirokastra, presentations and discussions with experts and time witnesses, and working sessions within the group.
The study trip/workshop 2019 in Albania was organized by crossborder factory, Youth Initiative for Human Rights Bosnia and Herzegovina, Franco-German Youth Office, Forum ZFD Bosnia and Herzegovina, History Museum of Bosnia and Herzegovina, in cooperation with Cultural Heritage Without Borders Albania, Regional Youth Cooperation Office, Institute for Democracy, Media and Culture, House of Leaves – Museum of Secret Surveillance, Justice & Peace Association, Center for Historical and Anthropological Research, National Museum for Contemporary History of Slovenia, with the support of CCFD-Terre Solidaire, Franco-German Youth Office, Forum ZFD Bosnia and Herzegovina, Regional Youth Cooperation Office, the German Embassy in Albania and the French Embassy in Albania.
The detailled program, the final report and the evaluations by the partcipants can be found here: http://www.memorylab-europe.eu/workshop/2019-albania-open-call-for-applications

In: La Revue Nouvelle, n°5/2019;
For online version please FOLLOW THIS LINK
During the war in Bosnia and Herzegovina, from 1992 to 1995, numerous individuals and groups in different European countries got engaged to protest against the war and the policy of “ethnic cleansing” and to show solidarity with Bosnia and Herzegovina and its citizens. This broad and heterogenous socio-political mobilization, at the intersection of citizen engagement and humanitarian engagement, has largely fallen into oblivion and deserves all the more to be revisited to try to better understand its scope and its signifcation. What forms has this mobilization taken and what was it aimed at? What discourses on Europe did it produce, and to what extent can we speak of an European movement? Why is this mobilization so little known? And what can be the meaning of this commitment today, twenty-five years later?

New publication: “Enough is enough”: Why and how a Belgian village decided to stop commemorating a massacre from World War One – or did it?

In: Mémoires en jeu / Memories at stake, published online 17.1.2019: https://www.memoires-en-jeu.com/varia/2767/
Is there a time to stop commemorating? Two years ago I heard that a village in Belgium, whose population had been massacred by the German Army in 1914, had recently decided to stop the traditional annual commemoration of this massacre. This sounded unusual, even spectacular. I knew about communities who do not want to commemorate acts of violence because their majority had been on “the perpetrator-side”. I knew about survivors of mass-violence who preferred not to remember what had happened to them or who were denied possibilities to commemorate this. I knew about memory sites which had fallen in oblivion, or commemorations which had been abandoned after a political regime-change. But I had never before heard of a community which had been the victim of a massacre, and which had regularly, over decades, commemorated this massacre, and then one day, without any change in the political situation, decided deliberately to stop this annual commemoration. So I decided to investigate this case.
The present article is the story of this research, which led me to discover the village of Spontin, in Southern-Central Belgium, where I met different protagonists from the village community and it’s surroundings. It’s a story with twist and turns: each question I answered brought up new questions, and the deeper I went into the topic, the more interlocutors I spoke with, the more enigmatic the case seemed to become: had there actually been a decision to stop the annual commemoration? And if yes, by whom and how had it been taken? Beyond the case of Spontin, the text raises various more general questions: under which circumstances does it make sense to stop or to continue the tradition of commemorations? What are the appropriate means to keep alive the memory of painful events? Who is legitimate to decide about such matters? At the same time, the article is also a reflection on my own relation to the topic of memorialization, on my own expectations and approaches when doing this research, and on my role as a foreign researcher investigating a village community I did not know before.

One of the goals of the Regional Youth Cooperation Office of the Western Balkans (RYCO) is to support youth projects which aim to contribute to “fostering reconciliation and constructive approaches to remembrance”. How are youth encounters tackling the topics linked to history and memory? RYCO wants explore this question in order to know more about the possibilities and challenges when working on questions linked to “remembrance and reconciliation” during youth exchanges, with the aim to build capacities of youth organizations to address these questions in future exchanges. In this framework RYCO and crossborder factory have launched in summer 2018 the participatory observation – research-project on the topic “Constructively dealing with the past”, in cooperation with an interdisciplinary team of researchers and youth workers from the Western Balkans and in relation with several RYCO-supported youth projects which are taking place in 2018.
More information: InfoDocument ParticipObservResearch 2018 RYCO_CBF_OFAJ (1)

There are good reasons to deal with Bosnia and Herzegovina. Its political system exemplifies, despite all specificities, realities and challenges that are relevant to the whole of Europe. As a former Yugoslav republic and country of the Western Balkans, Bosnia and Herzegovina is in the process of EU rapprochement with the goal of membership. In addition, there are many and intensive relationships especially with German-speaking countries. But how well do we know this country? What characterizes the political system and the socio-political situation of Bosnia and Herzegovina almost a quarter of a century after the end of the war and the Dayton peace agreement? The chapters of the book deal with the historical development of the country, constitutional requirements and reality, federalism, the party system, religious communities, cultural and educational policy, the role of civil society, the economy and the relations with the EU. The book aims to contribute to a better understanding of Bosnia and Herzegovina and to reflect on political and social challenges in Europe.